Marital difficulties in the days of working from home...

...aren't all that different from pre-COVID times.

1. Coffee: I don't like sharing my coffee. My coffeepot makes the amount of coffee that I want to drink every day, and I don't like that my husband insists on drinking a cup every day. (It was bad enough when he only demanded coffee on Fridays and weekends.) Clearly this means that he should give up caffeine and leave it all for me, not that I should get over myself and just make more coffee. Duh.

2. Distraction: He has terrible timing. My focus isn't the greatest at the best of times, and it seems like every time I can concentrate for more than 30 seconds he comes upstairs and distracts me. Doesn't he know that I'm trying to do about eight different work tasks while also making a grocery list, deleting/filing personal emails, browsing Ravelry forums, and doing something else that's slipped my mind due to my lack of focus? Oh, yeah, swearing at the local idiots on nextdoor. Keep your cats inside, people!

3. Laundry: Inevitably, the day after I've done laundry, he will announce that something, often the shirt he is currently wearing, needs washed. It's not like we're going much of anywhere, so it's not usually as urgent as in the days before social distancing, but since I'm whining I might as well whine, right? Pass me the cheese, please.

4. Cleaning: Since we've been stuck at home, he's been cleaning and organizing the basement. This sounds like a good thing, right? No. Why? Because he found boxes of my stuff, and is forcing me to go through the piles of WTF from high school. So far I've found a bunch of random notes written during classes, many reminders of our inexplicable love for Mötley Crüe, two suicide notes from the same person (one ending with the statement that her decision was final but we'd talk about it during lunch; facebook informs me that she's still alive and well and hopefully less of a drama queen), and this beautiful piece of found art: 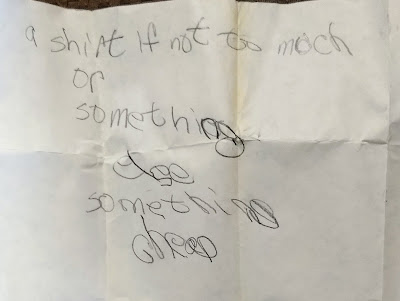 Perhaps someone will recognize this and tell me what it was in reference to.

So yeah. Waaaah. All in all, things aren't so bad. They could be a lot worse. I feel like I've made at least a few good life choices.

In other news, various music is bringing on ALL OF THE FEELS lately. I don't know if anyone cares, but I might ramble on about that in another post.

I am a squirrel on speed.

Hi there! I keep meaning to document these Interesting Times on this page, but distractions (sourdough quilting cleaning sashiko books feline high-fives) abound. BRB, going to sew for a while. Whee, finally finished the stack of coasters that have been ready to assemble for months now.

Okay. Left you alone for a while while I baked my sourdough and knitted through a virtual happy hour. And then I don't even know. See above re: squirrel on speed. Spent some time today in the Forbidden Room, and found that Zoey missed me so much she curled up against the door to wait for me to come out. Poor lonely kitty. Anyway, the wire shelving I'd used for yarn years ago is now in the closet, and I have space for a glass cabinet that a friend is giving me.


And now it's several days (weeks? Weeks. Oops.) later, and I'm still scattered. The glass cabinet is in the no-longer-Forbidden Room and is nearly full of spinning fiber. I've made bagels, cookies, pita bread, and many round loaves with Cxaxukluth, my sourdough starter. More dough is rising, and I have starter set aside for peanut butter cookies. Oh, and I have blueberries for a blueberry pie. I've learned how to use the TV as a computer monitor (yay, wifi!), and really need to clean my glasses.

I've read a bit but not enough, and I definitely haven't been knitting or sewing or spinning enough. Found a crate of cross stitch projects that have been sitting around nearly-finished for something like a decade.

How is everyone dealing with everything being shut down? I miss the library, but am otherwise mostly doing fine. Lack of focus is a thing. Which means I should probably publish just because otherwise it will never happen. Also I need to knead some dough!
Posted by Heather at 3:28 PM No comments: